Each year Spartan expands the stadium series to new venues. Last year they addeda stop at Lambeau Field in Green Bay, a bucket list stadium for any football fan. This year St. Louis' Busch Stadiummade its debut, a must race stadium for this Cardinal fan.

For me, the visit to St. Louis holds sentimental value. I lived there for a year and a half in middle school. The brightestpart of that tenure were the Cardinals. I was there for the 1985 World Series, where they got robbed on a bad calledby thefirst base umpire, Don Denkinger.

Following baseball remains a fun part of my life and I always root for the Cardinals, except when they play the Rangers😜.

So when I saw Busch Stadium listed on the schedule I knew where I would be August 11th!

Even though the current stadium is not the classic round bowl used in the 80s, it is a beautiful location for a SpartanStadium Series race. The stadium features an iconic view of theGateway Arch and so did my hotel room!

The immediate stadium area does a great job theming the atmosphere to celebrate one of the more successful major leaguefranchises. Those experiences reason enough for spartans to enjoy the race experience.

The stadium layout reminded me of the Washington Nationals stadium, very tight and modern with no room to place obstaclesoutside the venue. I can't imagine what it must be like to plan a course at a venue like Busch stadium, but the directorsdid a great job.

If you have been to a good amusement park they utilize space by winding walking paths through roller coasters and otherthrill rides to excite visitors. The course layout teased racers and spectators by using the A-Frame as a concourse levelbridge, vaulting racers over friends, family and waiting racers near the start line. I give them a big 👍 for settingthe mode and getting adrenalin levels up.

Speaking of the start line, the course started at the concourse level of one of the stadium ramps. At the first turn racershad to duck and bear crawl the entire length of the second ramp, killing any plans of sprinting to the lead.

At the top of the ramp were the battle ropes and 15 jumps.

Now the standard 'long run' that most races use incorporate before serious obstacles begin. For stadiums this run snakesyou through upper level seating both down the rows and up and down aisles. Aisle hand rails and the short stretches betweenprovide unique impediments that make grooving into a steady pace difficult. 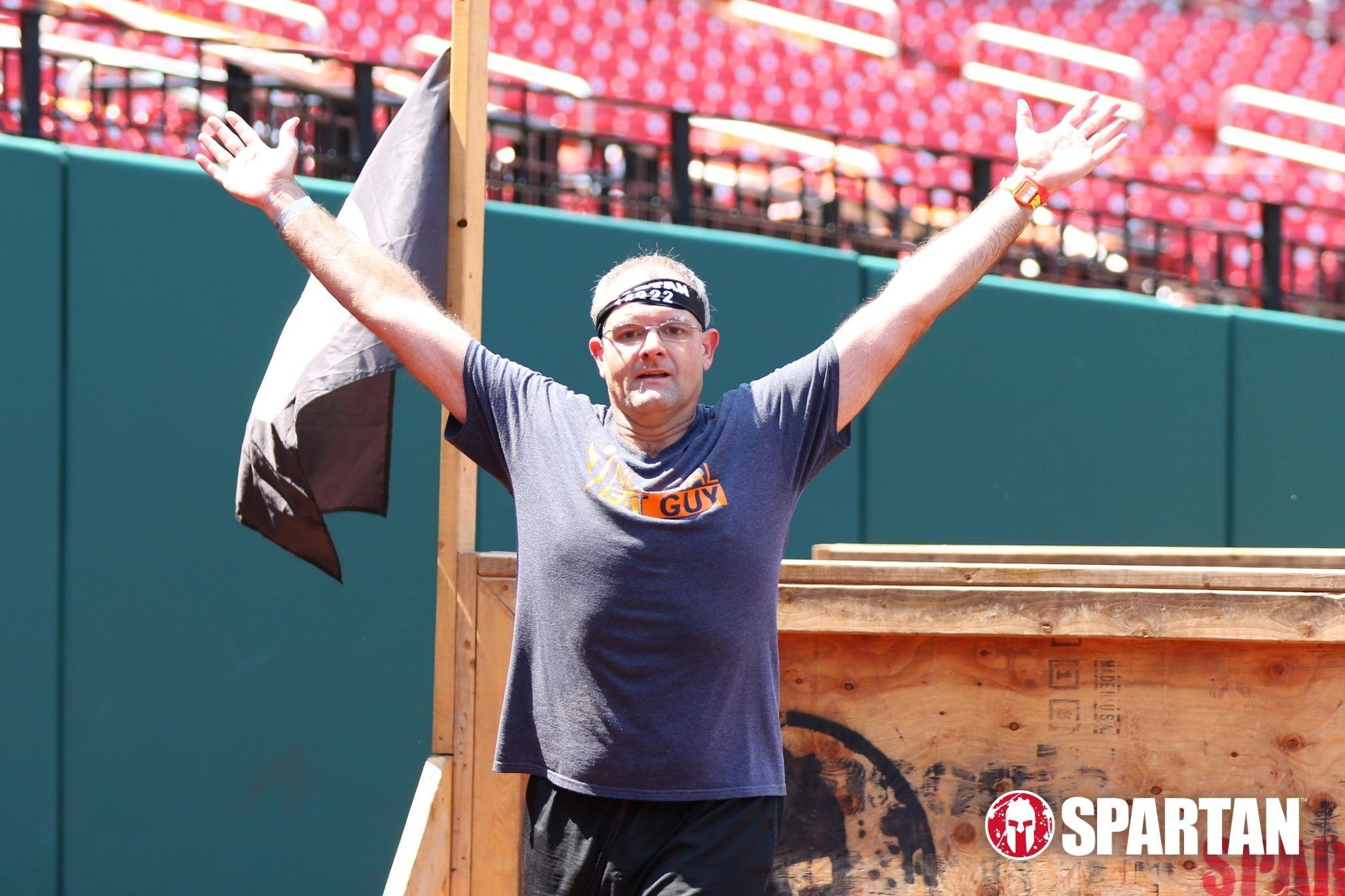 Before you knew it the course dove down stairs, featuring backward, downward bearcrawls. The next major obstacle was the jerry can carry. For a stadium this one was rather short, maybe 100 yards witha short set of steps.

After dropping the water jugs racers shot up a level of stairs to the A-Frame and a dense crowd of spectators excitedto see their favorite racers. Up and over everyone went. Meanwhile the Spartan photographers were capturing the apexmoment for everyone.

I also want to note this is the first race I have seen the time to do an obstacle tracked by timing mats. I traversedthe A-Frame in 17 and 18 seconds, good enough for average. I love this timing feature and hope to see it expanded toother obstacles. I knew I needed to improve my A-Frame time and now I have proof. The fastest times I have seen were8 seconds!

After rolling down the cargo net you raced back out to the stadium bowl, down the concrete to the next concourse entryand down to the Assault bikes. Today it was 10 calories instead of the standard 15. I suspect they wanted to eliminatepotential backups and batteries. On my second lap I noticed my bike was just about dead and saw 4 off to the side.

The other stadiums have done 10 calories for open class, this was the first time elite and age group had 10, not 15.

From there racers tried to fight rubbery legs to speed up and over the 8 foot wall and up another set of ramps. 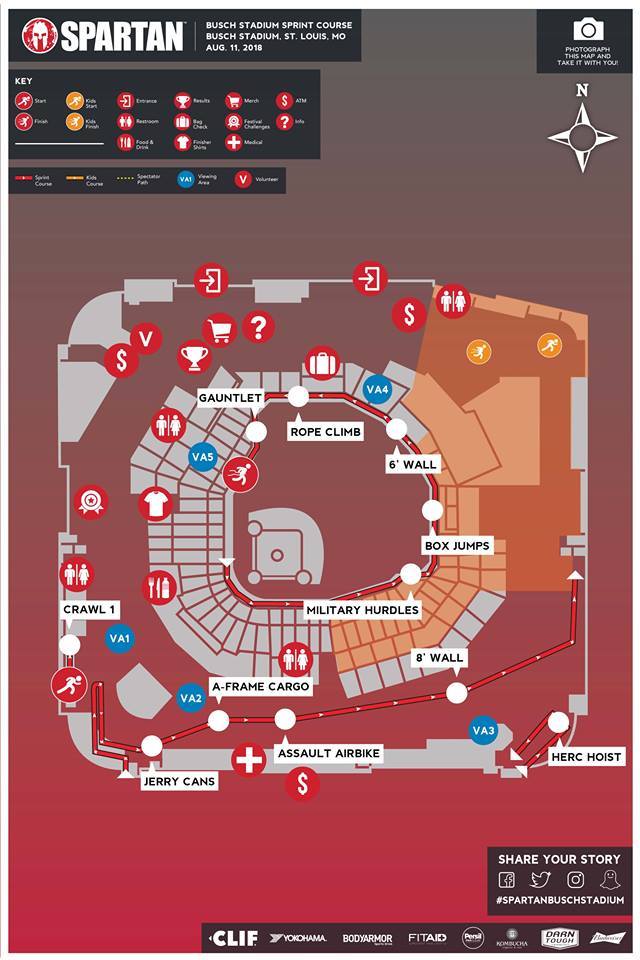 Thestadium's layout did not afford lower level space for many obstacles. So they were placed at the top of the stadium inthe corners and on the upper concourse level. Here racers were greeted with the spear throw, slam balls, rolling epicand the multi-rig.

Again, the course did a good job of teasing you by passing obstacles before diving down stairwells and back to the seating.It gets your anxiety up as you pass the spear and multi-rig knowing they lie ahead of you, but you just don't know where!

I noticed new slam balls, with the men's weighing 30 pounds. I am pretty sure they have been 25 pounds up to this race.

The multi-rig has become my stadium foe this year. Something about transitioning from rings to baseballs has just crushedme. Sadly, I failed twice just before reaching the bell. This is the 5th or 6th time that has happened to me this season.

The sandbag carry was late in the race and seemed to make up for the short jerry can carry. Racers tossed bags over theirshoulders and imediately started a trek to the top of the stadium. The sandbag carry featured about 4-600 yards and twotrips to the stadium top and back to the highest concourse.

The final leg of the course featured more stairwells and downhill bear crawls. There was a welcome bonus, the air conditioningof the visitor's locker room!

Here you did the standard 15 hand release push ups before emerging from the dugout like a major league hero to the course'sfinal quarter mile segment on the warning track. 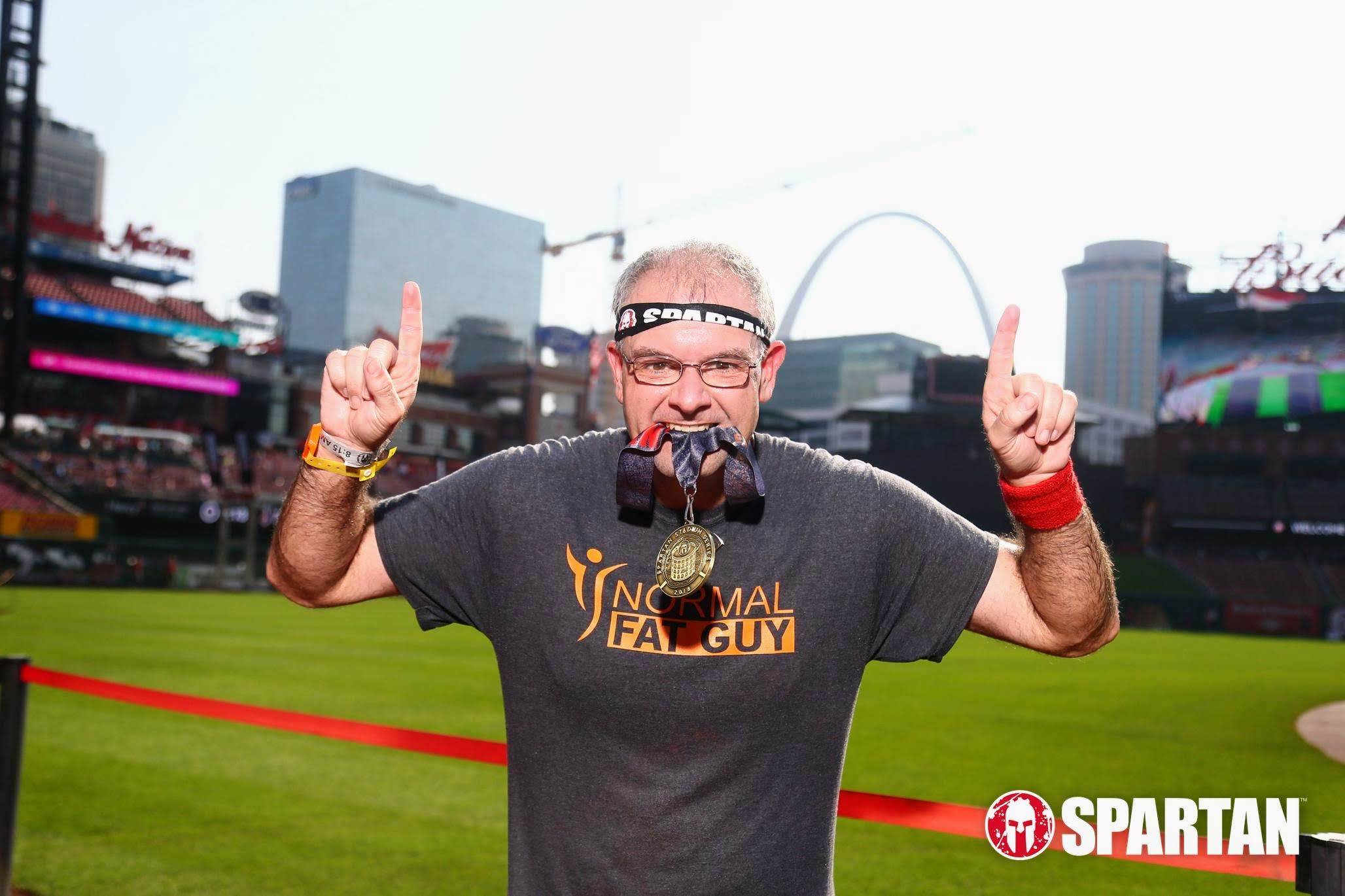 Military hurdles, box jumps, two 6 foot walls and the rope climb were all that stoodin the way of racers and the final heavy bag gauntlet.

I enjoyed the course and the venue and really hope Spartan and the Cardinals agree to schedule the event next summer.I know there were many Spartans that came to St. Louis for the race, many from Iowa, Nebraska and Kansas - not shortdistances. Of course I came from Philly, but that's another story.

Both my laps were fun and challenging. I enjoyed connecting with racers in the corral and on the course. I met a few dozenon my second lap who were doing their first stadium or first Spartan. Everyone seem to have a great time as the standardaccomplishment smiles were everywhere.

My only complaints with this race was the lack of BodyAmror and FitAid at the finish line. It was hot and steamy and thosecold beverages at the end help me cool down and recover.

I thought about taking a third lap, but decided the heat was not worth it for me. Hopefully at the September Philly SpartanI can crack a third lap for the first time.